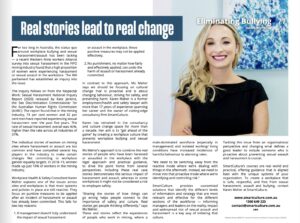 Karen Maher was recently interviewed by the Australian Mining Review as part of their November 2021 edition about our approach to eradicating sexual harassment in mining.

For too long in Australia, the status quo around workplace bullying and sexual harassment/assault has been lacking.
— a recent Western Mine workers Alliance survey into sexual harassment in the FIFO mining industry found that a high proportion of women were experiencing harassment or sexual assault in the workplace. The WA parliament has established an inquiry into the issue.

The inquiry follows on from the Respect@Work: Sexual Harassment National Inquiry Report (2020) released by Kate Jenkins, the Sex Discrimination Commissioner for the Australian Human Rights Commission (AHRC). The report found that in the mining industry, 74 per cent women and 32 per cent men have reported experiencing sexual harassment over the past five years. The rate of sexual harassment overall was 40%, higher than the rate across all industries of 31%.

The individual stories of women on mining sites where harassment or assault are too common and have compelled several key players in the industry to make certain changes like committing to workplace gender equality targets. In 2018–19, women made up just 16% of workers in the mining industry.

Workplace Health & Safety Consultant Karen Maher explains one of the issues across sites and workplaces is that most systems and policies in place are still reactive. They focus on punitive measures to be applied after an incident of harassment or assault has already been committed. This fails for two key reasons:

In contrast to this approach, Ms Maher says we should be focusing on cultural change that is proactive and is about changing behaviour, striving for safety, and preventing harm. Karen Maher is a former employment/health and safety lawyer with more than 17 years of experience spanning her career and the owner of cutting-edge consultancy firm SmartCulture.

Karen has remained in the consultancy and culture change space for more than a decade. Her aim is to “get ahead of the game” by creating a workplace culture that prevents workplace bullying and sexual harassment. Ms Maher’s approach is to combine the real stories of people who have been harassed or assaulted in the workplace with the legal approach and practical guidance, to drive the point home from several perspectives. Including these real case stories demonstrates the serious impact of harassment and assault, whereas in some workplaces it might not be considered a risk to employee safety.

“Sharing the stories of how things can go wrong helps people connect to the importance of safety and culture. Real stories get people thinking differently.” says Ms Maher.

These real stories reflect the experiences of people who work in mining, where a male-dominated workforce (especially in management) and isolated working/ living conditions have increased incidences of harmful behaviour to alarming rates.

SmartCulture provides customised solutions that identify the different levels of information and strategy that are most relevant and effective for the different sections of the workforce — informing managers and leaders on the reality, impact and widespread risk of sexual assault and harassment is a key way of initiating that culture.

Tackling this issue from an organisational perspective and changing what defines a good leader to include someone who is proactive about preventing sexual assault and harassment is crucial.

Contact us for more information about our new SmartCulture® multi-level program – Sexual Harassment Prevention in Mining.

We use cookies on our website to give you the most relevant experience by remembering your preferences and repeat visits. By clicking “Accept”, you consent to the use of ALL the cookies.
Cookie settingsACCEPT
Manage consent

This website uses cookies to improve your experience while you navigate through the website. Out of these, the cookies that are categorized as necessary are stored on your browser as they are essential for the working of basic functionalities of the website. We also use third-party cookies that help us analyze and understand how you use this website. These cookies will be stored in your browser only with your consent. You also have the option to opt-out of these cookies. But opting out of some of these cookies may affect your browsing experience.
Necessary Always Enabled
Necessary cookies are absolutely essential for the website to function properly. These cookies ensure basic functionalities and security features of the website, anonymously.
Functional
Functional cookies help to perform certain functionalities like sharing the content of the website on social media platforms, collect feedbacks, and other third-party features.
Performance
Performance cookies are used to understand and analyze the key performance indexes of the website which helps in delivering a better user experience for the visitors.
Analytics
Analytical cookies are used to understand how visitors interact with the website. These cookies help provide information on metrics the number of visitors, bounce rate, traffic source, etc.
Advertisement
Advertisement cookies are used to provide visitors with relevant ads and marketing campaigns. These cookies track visitors across websites and collect information to provide customized ads.
Others
Other uncategorized cookies are those that are being analyzed and have not been classified into a category as yet.
SAVE & ACCEPT